Start a Wiki
Bluto is a character in Mega Jump, and serves as Redford's younger brother. He can be purchased in the shop for 1500 Mega Points. This plucky fellow soars as high as his brother Redford. He may have fewer teeth but he's ready to kiss the sky! He has one brother and one sister, his sister is Rosie and brother is Redford. Bluto is the Cole leader of the team.

Bulto is a small blue monster with big eyes and soft clay like skin. He is very fat and round with a mouth with 8 teeth. He has three nails on each of his hands and feet. 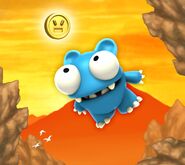 Wallpaper
Add a photo to this gallery

Retrieved from "https://megajump.fandom.com/wiki/Bluto?oldid=6682"
Community content is available under CC-BY-SA unless otherwise noted.